Adding yet another box mod option to their burgeoning lineup, the Vaporesso Luxe Nano offers a smaller version of the original Luxe. That was a rather popular vape mod, but there are some key changes with the Nano. It’s smaller, as is clear by the name, but it also tops out only 80 watts. The large screen and vibration feedback set it apart, but is that enough to stand out from the growing smaller box mod crowd? We’re determined to find out in this review.

Clean and simple seems like what Vaporesso was going with in the Luxe Nano’s design. This is a rather small box mod that easily fits into your hand and in your pocket. It isn’t quite as small as some of the latest pod mods and such, but it’s definitely small. The Nano is smooth all around, both the back and the front, with it’s edge to edge screen. No buttons are present, but the “v” used to unlock the menu is always lit. That 1.3 inch colour TFT screen is clearly the centerpiece, and there was nothing to take away from focus there. Even more so when you consider that this a smaller vape mod that is meant to fit in your hand.

As we would expect with this popular brand, the build is very good. It has the proper weight to size ratio to give it that quality feel in your hand. It looks like it could be delicate because of the smooth surface, but it is surprisingly durable too. The included SKRR-S tank is also in the same mould in terms of quality, and it comes in a colour that matches the Nano. Choose from Black, Red, Silver, Bronze, Blue, or Rainbow and your entire kit will get the same paint job.

On to the crucial part of this review, which is the performance of the Vaporesso Luxe Nano. It tops out at only 80 watts, but that doesn’t mean it can’t be powerful. Vaporesso has done a great job maximizing the wattage in their smaller units in the past, and this time was no different. The box mod ramped up quickly and reached 70 watts in no time, before inching up the rest of the way. No worries there. Using the included GF sub-ohm coils, we loaded it up and found the performance to be good, if not great.

Generally you do want more power from coils rated this low (0.15ohm and 0.2ohm), and we did find that vapour was nice but not impressive. The flavour was rather good, but again probably on the average side of things. The great thing is that this vape mod also supports Vaporesso’s older GT line of coils. Since we had a higher ohm one laying around, we tried it in this set up and it really took the experience up a notch. There was more vapour and it was at a great temperature for our taste. The flavours seemed to come through sharper too, so overall we know the potential is there with the Luxe Nano, you just need the right set up.

We know that Vaporesso likes to include a lot of modes, but we were truly blown away at everything they included in such a small device. Often the smaller box mods, especially those with a lower wattage, get cut out of the more advanced features. Not here. If anything, the Luxe Nano has one of the most comprehensive set of modes of any vape mod out there – small or large.

The basics are there, so you have variable wattage, and you also have variable voltage which isn’t always a given actually. Temperature control is in there too, and that is becoming more of a standard these days. It can handle Nickel, Titanium, and Stainless Steel and does it well. But you want to really customize your vaping experience you can switch to CCW mode, which is basically a power curves mode. Not enough for you? There’s Super Player (SP) mode that is ideal for running very low resistance coils. Last but not least, you can set it to Bypass mode and make use of all the power this box mod has. All in all, it is a very stacked set of features and gives you tons of flexibility in that regard. 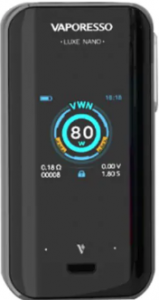 Vaporesso went the route of a touch screen for the menu, which can go awfully well or just awful depending on quality. The touch screen itself is very responsive and makes it easy for you to scroll through the settings and find what you want. The menu is intuitive, so no issues there at all. The biggest gripe we had was the number of steps it took to get into the menu in the first place. You have to press the fire button three times… and then press the “v” another three times – just to unlock the screen and get into the menu! This was surprising and a bit bothersome, but also not a huge deal unless you are constantly changing your settings.

Pressing the buttons on that screen also triggers a vibration, or what is called haptic feedback. This is kind of cool in the beginning, but it can get annoying really fast. Thankfully, you can turn it off (or up) via the settings menu. Battery life is pretty standard, but goes way up if you turn off vibration, so we tended to leave it off.

The tank was very straightforward and using the traditional fill design. Namely, you unscrew the drip tip entirely to reveal the entry point for e-liquid. We have no problem with this, although we did get used to sliding the drip tip aside as with a lot of new box mods. Changing coils is easy, you just unscrew the top, the base, and remove the glass, and then reassemble. All in all this kit is quite easy to use, but it has some annoyances that you must get used to (or get over).

Coming in at £64.99, this isn’t the cheapest small box mod you’ll find. However, it is a quality brand and comes with a good tank and lots of features. Overall, it’s an accurate price point.

The Vaporesso Luxe Nano Box Mod kit is a really nice product with some very unique features. We can’t think of another mod out there with haptic feedback, so people who like vibration feedback will love that addition. It’s small and portable, and has pretty good battery life (as long as the haptic feedback is off, otherwise it will drain it). It performs pretty well as is, but we saw a big improvement there when switching coils and that’s what we’d recommend for those who like a lot more vapour.

That’s the thing with the Luxe Nano. It’s almost great. It doesn’t quite have the power for the coils it comes with, but it can do very well with others. It gives you vibration feedback, but it drains your battery when that’s on. In a way, this is Vaporesso’s attempt to make a small box mod with features that usually go in larger ones. They hit on it well when it comes to feature set, but it also pushes the Nano to the limit in other areas. Overall we did like this vape mod and would recommend it, but more as a secondary vape or as a trainer for more novice vapers who are thinking about getting into more advanced devices. The Nano is a perfect training ground, and is a really nice product overall so it’s definitely worth picking up.