We’ve never reviewed a VZone product, but that’s mainly because the company is rather new to the vape scene. They’ve released a few different products together, including the VZone Graffiti 220W box mod. It looks absolutely outrageous with the graffiti colouring and big fire button. With that as an allure, we were dying to find out how it performs. Time to see how it stood up to our testing.

We’re seeing a trend of really out there designs lately, and this latest one fits that category somewhat. However, we wouldn’t say it was quite “out there”, but rather very colourful and bright. It comes in three different colour options for the side panels, but the one that stands out most is the Graffiti. It’s an image of a kid with a wall behind him along with graffiti, and a grin. How perfect is that? We loved it, but their other two designs were also unique so don’t discount them.

In terms of the build, we can actually start with how the design was made. VZone uses an In Mould Labelling (IML) technique to inject the coating onto aluminum alloy. It’s nice to see a company pay attention to prints, because they often can wear quickly. The idea with IML is that they will last a lot longer. When you have designs like these, you definitely don’t want them harmed! The rest of the build is equally well done, with a nice finish and that big fire button that stands out. It springs to life well, and overall this product has a very solid feeling to it. It’s a good start for VZone in this department.

Of course performance is really want we want to know about, and with a newer company there are always some doubts. Taking the VZone Graffiti 220W for a test run, we made sure to put it through some various scenarios with different coil heads and settings. To our delight, it performed very well, delivering power where it needs to be and producing some very nice clouds. This box mod also did an admirable job, in combination with good coils, to produce very good flavour.

A lot of the credit goes to the HW Board 1.0 chip that the Graffiti uses, and it not only gives you power but pairs well with every atomizer we threw at it. It fired up at the press of a button and was able to reach the proper heat level quickly in any mode. We should note that the voltage output is capped at 7.5V, so you’ll need a low sub-ohm coil to take advantage of the top end power that this vape mod has.

Despite being so new, VZone didn’t spare any features from this box mod. You can go for variable voltage, or temperature control for either Ni200 Nickel, Titanium, or SS316 Stainless Steel. It even comes with a TCR (Temperature Coefficient of Resistance) mode, which also more advanced vapers to further play with the balance of temperature and resistance. For newer and intermediate level vapers it may not be helpful, but it gives them room to learn if they want to.

It doesn’t end there for the VZona Graffiti. They’ve added a so-called “taste” mode, which is new to us. Split into Norm, Soft, Hard, and User, this mode changes the power ramp time in order to change the type of vape you get from it. The “soft” setting allows for a slow rise up to proper heat levels, while the hard setting gives the coil a surge of power then dies down to a more moderate level. The user setting is another version of the power curve concept, which we’ve seen before but is done well here too. 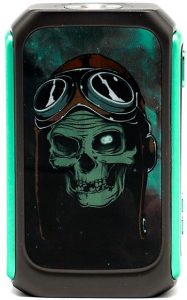 We actually didn’t get a great start with this vape mod in terms of ease of use. We simply couldn’t figure out how to get that battery door open! It is held together to the base by a very powerful battery. So powerful, that we initially couldn’t understand how to release it. Thankfully, we finally did realize there is a little notch at the bottom of this mod that allow for you to get some leverage using a coin or even a fingernail. It got easier after that first time, so we consider it a slight hiccup.

The battery case has a ribbon to it so you can pull to release them, which is convenient. It also has ventilation holes on the bottom, which is never a bad thing for a high-powered box mod like this to have. Other than the battery delay, everything else about this mod made it easy. The centered and spring loaded 510 thread was a great home for the atomizer we threw at it. The +/- buttons functioned great in getting us through a rather simple menu. We will say that the screen was a little small and didn’t have great contrast, so at times it was a tad difficult to see. Still, there really isn’t much to complain about in terms of ease of use. The VZone Graffiti is up and running in very little time after you take it out of the box.

We scanned our list of vetted online shops, and the best price we found was £54.99. That’s within a good range that we expect to pay for a box mod with this much power. You’ll have to purchase a couple 18650 batteries of course, but this still won’t break the bank.  Even with this being a newer brand, this price point isn’t an issue for us given all you get.

The VZone Graffiti 220W box mod caught our eye from the very beginning. It just has such cool imagery and colors, that we were excited to try it. After testing out for a while, we still hold a lot of that excitement. It’s just a very solid vape mod with a really phenomenal look – if you’re into this sort of art.

One of the only detracting factors for us was the small and basic coloured screen. On the other hand, a screen like this saves you on battery power. We were able to get a full day out of the Graffiti, which even today is rather impressive. With great vapour performance and a truly stylish look, we think the Graffiti is bound to put VZone on the map. If you’re looking to add to your arsenal, or start a new one, you should definitely consider this high-powered vape mod.