Before we get started with the review, let it be known: the Pro Series 3 is a fine device.

It’s been quite some time now since V2 Cigs has released their flagship Pro Series 3 vape pen. While V2 Cigs was always a major e-cigarette outlet, it was the Pro Series 3 vape pen that really caught many people’s attention. A 4 in 1 device, having the ability to vape e-liquids, dry herb, loose leaf tobacco and wax oils? Who didn’t want that option? At the time, this device seemed to be the go to vape pen. And, what’s impressive is that they held that title for a long, long time. In an industry with technological improvements and thus new/better vape pens seemingly every week? It was clear V2 Cigs had a solid device. But, they weren’t satisfied. They wanted to create an even better vape pen. And so they set out with creating the Pro Series 7 vape pen. Many products have a successor, but oftentimes they are vey similar to their predecessor. This is not the case with the Pro Series 7 compared to the Pro Series 3. Let’s take a look at the Pro Series 7 review.

When V2 started looking to create an even better vape pen, no one was expecting this. The Pro Series 3 has a 650mAh battery. We assumed the Pro Series 7 would be a slight increase to roughly 900-1,000mAh. We weren’t close. The Pro Series 7 comes with an 1800mAh battery. This plays a massive role in the increased vapour volume performance which we will cover below. Additionally, battery life depends on your usage, however it does last significantly longer than the Series 3 which lasts roughly 6-8 hours on average. With the Pro Series 7, you can expect at least two days of usage without having to recharge if you’re vaping e-liquid. It’s slightly less if you’re using it for wax/dry herb. Moreover, the Pro Series 7 allows for more flexible variable voltage settings (3.7V, 4.2V and 4.7V compared to 3.2V – 4.2V settings on the Series 3). Overall, the improvement, specifically on the battery life and power, are notable.

In our Pro Series 3 review, we pointed out how versatile that kit was, particularly regarding the vapour volume. It was covered widely in the media, without V2 Cigs paying for that PR. So, it’s no shock to see how well the Pro Series 7 performed here. The added battery power certainly helped in delivering a massive amount of vapour volume. And, it’s not just the amount of vapour that impresses here. The consistency of the vapour is, by far, the best from any similar device on the market. This is because V2 Cigs put in place the perfect temperature settings on the various variable voltage settings (200°C/390°F, 210°C/415°F and 225°C/440°F). And lastly, the Pro Series 7 comes with a larger tank that the Series 3 (2.5mL compared to 1.6mL on the Series 3). This allows for roughly 1,000 top quality puffs.

If you read our Pro Series 3 review, then you already know just how simple it is to use. When V2 Cigs created the Pro Series 7, usability was the most important factor for them. Yes, they wanted to create a more improved device. However, they did not want to compromise on intuitiveness. They managed to keep usability the same. Like the Series 3,  the V2 Pro Series 7’s battery is encased in a single aluminium unit. Additionally, the clearomiser actually slides right into the tube and stays attached with a magnet just like its predecessor. Some have argued that this would create leakage but this was proven false by the Series 3. Additionally, many vapers complain about changing wicks and coils which oftentimes gets very messy. There is no need to do this with the Pro Series 7. Furthermore, V2 Cigs is one of the only companies to still offer devices with a USB passthrough. Generally speaking, these are a thing of ‘the past’. However, they are still wildly popular. Congrats – you now have access to instant power. And of course, using the device (like powering it on or off) is a breeze. It comes with a 3 click on/off button. All in all, we’re extremely happy to see that V2 Cigs has kept usability in mind for their customers. 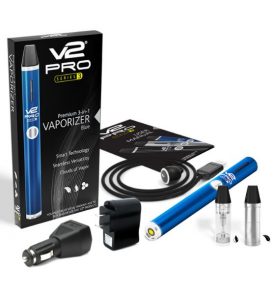 We have reviewed several V2 Cigs product on this site. No matter what issues we’ve had or simply when we were testing out their customer support, it’s always been a pleasurable experience. They are, after all, one of the largest e-cigarette providers in the UK. They service hundreds of thousands of people, so it’s no surprise to see quality support.

Like the Series 3, V2 Cigs offers a 14-day money back guarantee and a warranty that covers one kit purchase. If you received a faulty battery, you can change it within 6 months of your purchase. We don’t think you can find anything better than that, as the industry norm is generally 60-90 days. Additionally, V2 Cigs is one of the only companies to allow you to return opened cartomisers (up to 2 cartomisers). We’ve yet to come across a company that has a policy like that.

Shipping is free as long as your order is over £57.99. Since this product is roughly double that price, your shipment will be free.

The Pro Series 7 is a significant upgrade from its predecessor, primarily due to its battery performance and vapour volume. Moreover, we were happy to see that V2 Cigs made it a priority to keep usability as straightforward as possible. For a kit that’s £120, we were expecting a few more gadgets. But in the end, gadgets and features don’t matter so much. It’s all about overall performance, and the Pro Series 7 is an absolute beast